Original future for the bathroom’s style by SIMAS 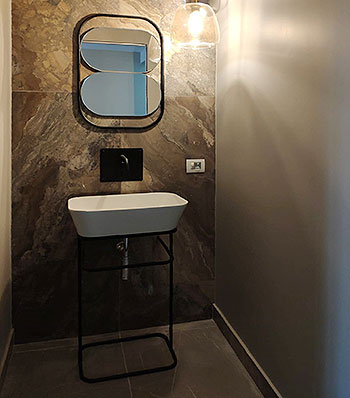 An original and unusual style recently realized by the architects Francesca Damian and Umberto Carlos Calloni, from the HCC Studio of Milan, aimed to minimize the classical rigidity and gravity of a medical clinic, usually a cold and aseptic place.

Following a new and idea of planning which give space to the maximum creativity, they tried to make a real estate in the city center of Milan, at the beginning for an end use as offices, to a medical clinic modern and welcoming, elegant and functional. A different taste to conceive a professional working place, destinated even to the public, nice and functional which transmits a great energy, comfort and reliability sensation.

The style proposed in the bathroom ambient as well, which, even respecting the norms for the differently-abled, transmits a researched atmosphere both for the color selection with clear and warm tonalities, and for the design elements which have been used. A charming background which has seen the introduction of

SIMAS, 100% made in Italy, granted by the trademark Ceramics of Italy, in the ante bathroom with WAVE basin white on the black matt frame, a real furnishing system, with a soft and elegant silhouette, where the lateral bars can be used and towel rails, coordinated with the design of the double mirror, which transmits a softness sensation even in a windowless bathroom.

Inside the bathroom, supplied by SIMAS, it has been installed the wall hung basin FLOW, with a plane area and pre punched for single tap hole, which permits even to the differently-abled persons to use it very easily. For the sanitary wares has been selected the wall hung WC FLOW, distanced from the wall by a drywall, in order to make the WC able to respect the regulation of the wall distance. Electronics taps are from Artis and the tiles in fake in similar marble are from Refin.